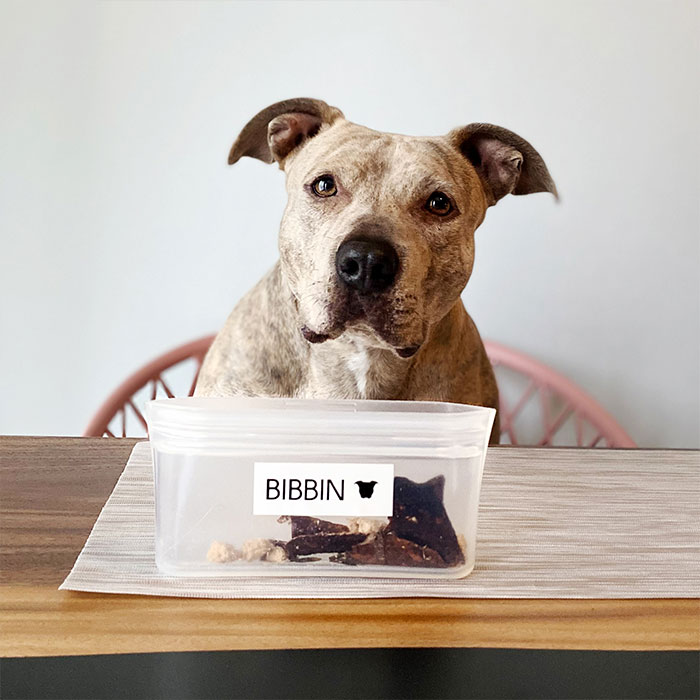 Josie (aka Bibbin’) got her nickname from the show Bojack Horseman 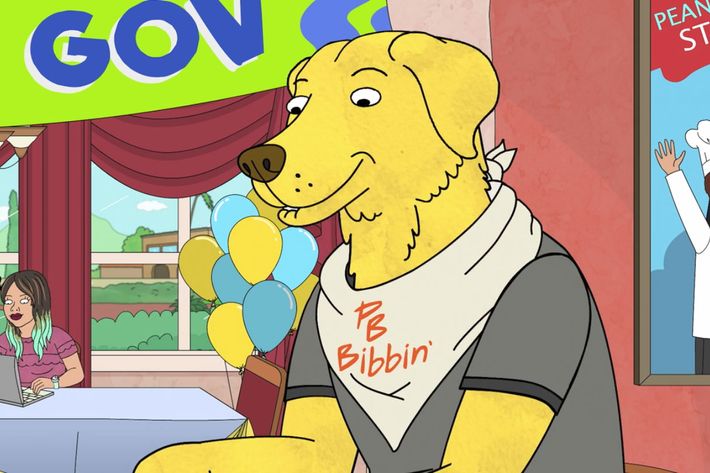 Josie was found when she was loose in San Bernadino, CA and ended up at animal control. The shelter was full, so she was at risk of losing her life for space when no one claimed her.

She made it out alive because a local rescue pulled her. Unfortunately, she ended up with people that did not deserve to have a dog, so she and other dogs were severely neglected.

She made it safely to Wisconsin to be our foster…but she never left and became an official foster failure.

Hobbies: Snoring, snuggling, being a kleptomaniac, yelling BAAARRROOO, and searching for food.

Fun Facts: She is 100% American Bully — our 2nd purebred rescue! She is missing quite a few teeth and has a pretty obvious overbite. 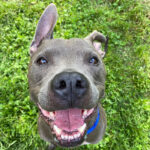 Fry joined the pack when the humans met. He was obviously meant to be!

Fry was Issac’s foster failure when he was a puppy after he was abandoned in an apartment in Arkansas.

Hobbies: Watching for the mail, playing with his friends, and watching out for his #1 human Issac

Fun Facts: He is a certified service dog and loves every dog he meets! He is an APBT x AST x boxer mix. 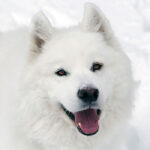 Freja was adopted from Playing Again Sams, a Samoyed rescue in Wisconsin.

She is loud, bossy and a sensitive cloud monster.

Hobbies: Yelling, trying to steal paper from the garbage, patrolling her land, cleaning Fred’s ears thoroughly, and herding Fry and Fred if they don’t listen to the humans

Fun Facts: Freja was adopted 2 years after Fred. She has been living with severe hip dysplasia for years and was the first dog to start a raw diet. She loves to play fetch and get ALL of the attention. She prefers goofy male dogs so she can boss them around — Fred and Fry are perfect for her!

Someone in California decided to abandon a dog in a park in 2014. He was brought to a shelter, wasn’t claimed, and was listed for adoption.

I was working at the shelter as an adoption counselor at the time, so I met him before he was available to the public. He was rambunctious, totally untrained, and a typical husky teenager.

I remember showing him to someone who traveled from Hollywood to meet him after she saw his photo listed on the shelter’s website. She quickly decided that he was “too much dog” for her.

I knew that he needed the right kind of home that could handle his personality and strong husky breed traits. He acted like he lived in someone’s backyard with little to no attention that he craved so desperately.

I was a cat lady at the time and lived with my original foster failure cats, Milana and Vinnie, and a rough-looking FIV+ cat named Chester who I took in from the streets.

I was not looking to adopt a large dog, but there was something irresistible about “Freddie.” I just knew that he HAD to be mine.

I decided that doing a cat test would decide whether or not he would come home with me. My co-workers helped him meet a confident cat at the shelter, and he passed with flying colors.

In July 2015, we had to move from California to Wisconsin. I packed a few bags, gave away most of my belongings to a thrift store that is run by my friends’ rescue Foster Army in Riverside, CA because I had to have room for my big boy Fred, 2 foster rabbits, and my 5 cats. Priorities, right?

After we got to Wisconsin, we did some fostering and adopted 2 dog friends, Freja & Josie.

In 2017, someone in Perris, CA decided to give a perfect dog named Diamond away at a yard sale when she was neglected and tied to a chain in their yard. The woman who took “Diamond” couldn’t keep her, so someone in the rescue community networked her.

Someone I knew tagged me on a post about her, and I got the same feeling that I had when I met Fred for the first time. I knew that she had to come to me. The original plan was for her to be my temporary foster. Whoops!

She fit in perfectly right away, so she became a foster failure in record time. I decided to rename her because she didn’t respond to “Diamond”. Since I already had Fred and Freja, I went with another F name — Fiona!

From 2017 to 2019, I was frequently asked if they were related. Fred was listed as a husky/shepherd mix at the shelter, but he had a lot of goofy bully breed traits too. I had him tested in 2014 through another DNA company, but there were questionable and incomplete results. His test came back with Siberian Husky, American Staffordshire Terrier, and A LOT of unknowns.

I thought that Fiona was probably husky, maybe shepherd and possibly lab?

I wanted to do a new DNA test for them to see if they had some of the same breeds because they were so similar.

I was not satisfied with Fred’s previous results, so I started researching other tests.

I saw that some of my friends had tested their dogs through Embark. After reading about it, I learned that:

Embark tests more breeds than any other test — over 350 breeds!

Embark is the most accurate dog DNA test on the market

Embark is the world’s only canine DNA relative finder

Save $50 on Breed + Health Kit! Use code BARK50 at checkout. This offer could end at any time! Shop Now!

I joined the Embark Dog DNA Discussion Facebook group before I ordered tests and was amazed at how many incredible stories there were. I remember reading about a dog who got symptoms of a condition that their Embark test detected shortly after they got their results back.

I wanted to know what types of genetic health conditions my dogs had so I could have time to prepare. Finding out what breeds they were was just a fun addition.

I also tested my purebred samoyed who I adopted from a samoyed rescue in 2016 just to see if she came back with any health concerns.

Her results came back first, so I anxiously waited for Fred and Fiona’s to find out if they were similar breeds.

When I got their results back, the first thing I noticed was their breed lists.

I was not expecting their results to be that similar! I figured that it was just a weird coincidence since so many huskies and bully breeds are backyard bred/dumped in California.

Then I started looking at their family trees…

I knew that the generated family trees aren’t 100% accurate sometimes, but they were still weirdly similar. Did I really adopt 2 dogs who were this alike?

I decided to post in the Embark Discussion group on Facebook to see if an expert could help me wrap my head around the results.

I learned that I could get “relatedness” information from Embark directly.

The COR (or coefficient of relatedness) between Fiona and Freddie is 51%, so their system indicates that they are full siblings!

I have no idea if they feel like they know each other from their younger life in California, but they are a perfect match!

I really hope that I will get an alert that another close family member is added to the Embark database in the future. I can’t help but be curious about their past.

Order your own Embark DNA Kit! 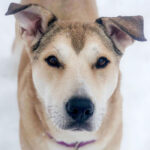 Fiona came to us in 2017 after her former human gave her away at a yard sale in Perris, CA. We don’t know anything else about her past other than that they called her Diamond. A woman who was shopping ended up taking her in temporarily so she didn’t end up at a shelter.

A local rescue helped her get ready to travel across the country from CA to WI in September 2017 to be our foster.

Every update about her personality made it obvious that she would be a foster failure right away. She is PERFECT.

Transport volunteers from CA to WI got her safely to us, and she fit in immediately.

About 2 years later, Fred and Fiona got DNA test results that revealed that they are long lost siblings! Read their remarkable story on iggysays.com!

Hobbies: Snugglin’, gazing at anyone she loves, picking up toys and gently pressing them on you so you throw them, asking for belly rubs, and being insanely sweet 100% of the time.

Fun Facts: She got along with everyone as soon as she arrived.

Fred was adopted from a shelter in Southern California in 2014. Very little is known about his history. He was kicked out of a car in a local park when he was about a year old. Witnesses saw him try to chase the car, but they never stopped.

Fun Facts: He was almost completely untrained when he was adopted. Now he is CGC certified and will become certified as an official therapy dog.

In 2017, a female dog in need traveled from California to Wisconsin to be our temporary foster. She was renamed Fiona, and immediately became our 2nd foster failure dog. In 2019, a DNA test revealed that she is Fred’s long lost sister. Read their remarkable story on iggysays.com! 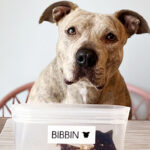 Josie (aka Bibbin’) was able to participate in an outdoor, socially distanced “pit bull only” obedience class that was organized by Apple Valley Pit Crew over the summer, but she hasn’t been able to do anything since. Ya girl has started to resemble a potato.

If she could create her own schedule, she’d have a snack every 5 minutes, watch TV, take 20 naps, and would only “do her business” 2 feet from the door. I *know* that she has been through some rough times, so I did not anticipate this level of entitlement…but here we are!

She is intelligent, stubborn, difficult, pushy and needy…but food motivated. Positive reinforcement helps her anxiety and mental stimulation, so she needed a treat that breaks apart easily that she loves so we can work on dropping her weight before the snow hits. Naked Southern Californians and cold weather don’t mix, so she’ll be under layers of fleece and blankets until May.

I usually go through products until I find my favorite (and the animals do not mind), and the winner is Raised Right. I can break them up into tiny pieces so Josie can have 5 separate rewards out of one chip. Fiona can be obnoxiously picky, but she loooooves them. Freja is on a limited ingredient diet, so this treat is perfect for her — it only has 1 ingredient. It’s also a treat for both dogs and cats, so we don’t have to have containers scattered all over the house.

The chips fit perfectly in Zip Top silicone bags that I am obsessed with. They’re reusable, freezer safe, dishwasher safe and microwave safe. Pairing efficient products together makes life with a herd of rejects so much easier.